HOW MANY INTERVIEWS IS TOO MANY FOR A CANDIDATE?

You may have seen or heard of Mike Conley who took to LinkedIn in 2021 to vent his frustration about the number of interviews the company he was applying to work for wanted him to attend – 9 in all!  Despite being really interested in the role, being aligned to the company’s mission and offering generous remuneration, Mr Conley pulled out, fatigued by the process.

In summary he believed that employers’ fear of picking the wrong candidate wastes more time than is necessary; suggested contract-to-hire or other forms of trial periods could be an antidote to hesitation during the hiring decision.[1]  Warning employers that the number of interviews can make candidates look elsewhere, he ended his post with a declaration: “With this withdrawal, I make a stand. A stand against never-ending interviews. A stand for job hunters.”[1]

Mr Conley’s post went viral, with more than 1.9 million views and was picked up by some major news outlets.  In addition, there was a lot of support from other professionals for his stand who commented on his LinkedIn thread.

So how many interviews is enough?

I think we can agree that most candidates would expect a minimum of 2 interviews for a role.  Ask yourself what further assurance will you get by adding on another 4 or 5 interviews?

Prior to 2017, Google was renowned for subjecting some candidates to over a dozen interviews.  Their thought process was to avoid false positives or toxic hires.[2]  In 2017 Google conducted their own internal research which found that after the fourth interview, interviewers had 86% confidence that the candidate should be hired.2 After that, confidence rose by less than 1% with each additional interview.2 Furthermore, 94% of the time, the hiring decision remained the same whether the candidates were interviewed 4 or 12 times.2 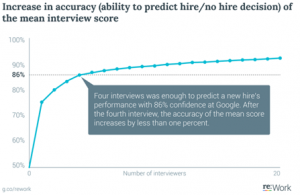 While this finding is specific to Google, it reflects findings from the UK’s Behavioural Insights Team, who recommend having at least three reviewers for each candidate.[3]

I can totally see where Mike Conley was coming from.  For one of my own roles, I underwent 8 interviews.  After the 8th I spoke to the recruiter and told him I wasn’t going to attend anymore!  My view was that if the organisation was so indecisive about employing me, then we weren’t a good fit for each other.  Luckily, they did employ me and I went on to have a long and fabulous career with them.  And not long after I started the company implemented a best practice recruitment model of a maximum of 4 interviews for any role, including at the executive level.

So, what does this mean for your organisation?  Coming out of lockdown, employees are reassessing what’s valuable to them and, for the most part, are now sitting in the box seat to choose their next role.  Don’t make your recruitment process the reason they don’t choose you.

Want to join the discussion?
Feel free to contribute!

What Gives You Joy At Work